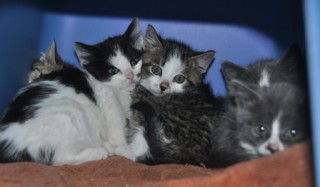 Story of the “Power litters” of kittens

It is common for people to contact NWAS about kittens born outside to wild mothers. What a lot of people don't realize is that if young kittens and puppies are not handled and exposed to people within the first 8 weeks or so of life they are wild. People mean danger to them and they will fight tooth and claw to try and protect themselves. They can be tamed, but it takes lots of time, patience and commitment.

The “Power litter” were given strong names, Electra, Diesel, Hydro, Wind, Nuke, Geo and Solar as they needed all the help they could get just to survive. There were two litters, one around 6 weeks old, the other around 7 weeks, both came from a rural area 100 kms from Smithers, their mothers strays. For optimum social and emotional development they should have been with their mothers for another few weeks, but most would have died from hunger or cold and any surviving female would be pregnant by six months old. So they came to NWAS.

On first sight they were a colourful pile in the corner of the crate. Ears pinned back, eyes like saucers they huddled as far away as they could get from anyone approaching. Gloves were essential, these tiny teeth and claws are sharp.

Weighing no more than a pound, it took two people to hold each one for a vet exam. And they needed a vet. Most had bloated stomachs and high temperatures, all were throwing up. They were housed in an area away from the other cats as it wasn't clear what was wrong with them. Giving medication was a challenge and over the next couple of weeks several had to be syringe fed as they weren't eating.

It was impossible to socialize them enough at the shelter so experienced foster homes were found, the two boldest, Diesel and Electra going to a home with children, the other 5 to a quieter home.

Most were doing well but Nuke and Wind, the two smallest, still needed syringe feeding at times, Nuke responded well but tiny Wind died a few days later. An autopsy was inconclusive about a cause of death. It is always sad when an animal dies, especially such a young one, but volunteering at an animal shelter is not all cuddly kittens and puppies. We can only take solace knowing that we did all that we could.
After a few weeks Electra, always the boldest, was adopted, but Diesel was becoming more withdrawn. So kittens were swapped, with Nuke, Geo and Hydro going to the busier home and Diesel joining the wary Solar in the quiet one. After a few more weeks, when they could be handled easily they all returned to the shelter and were available for adoption.

But their story wasn't finished. Geo and Hydro were adopted then Nuke went to a home. But a few short days later she was not eating and becoming listless. With IV fluids and antibiotics she perked up but examination showed she probably had an obstructed intestine. Her only chance for survival was surgery. The cost: between $1000 and $1500. A huge amount of money for a risky procedure. Once more we were facing an ethical dilemma, could we justify spending that amount of money for a surgery which may well be unsuccessful, money which could be used to spay and neuter 20 cats and dogs or feed dozens of others. But it wasn't just our decision, Nuke now had a family. They made the decision to operate and, amazingly, were willing to pay the whole cost of the surgery.

The operation was performed, the next day she was playing and eating, a couple of days later she was ready to go home. And had a relapse. Her family made the heart rending decision to have her euthanized. She was 4.5 months old.

NWAS is a voluntary operation. Apart from the part time caretakers all the work is done by volunteers. Without the help of many, many people we could not exist and do the work we do. With the support of the local vets, the businesses who donate food, blankets and other essentials, the groomers who tame neglected coats, foster homes who care for young, old, sick or otherwise needy animals and all the people in the community who donate time, supplies and money we are able to take in and rehome approximately 220 dogs and cats a year. We also run a low cost spay and neuter programme to help low income pet owners sterilize their pets.

The Power litter illustrates why we do what we do. Five out of seven kittens are healthy and providing companionship to various families. There was a lot of tears with these little creatures but they weren't all grief. The first time shy little Solar purred when I held her my tears were from joy. And that is what keeps us all going.

Why spay your dog? 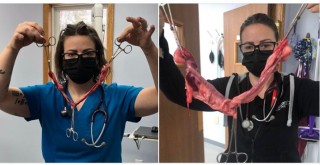 Why spay your female dog ? You don’t plan to breed her and you watch her when she is in heat, right? You make sure there is no chance of pregnancy ? Well… here is a size comparison for you....more 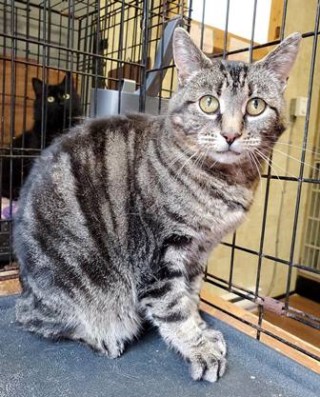 FOR ADOPTION: ZELDA is an absolutely lovely 11 year old female looking for a family to spend her golden years with. This sweet senior arrived at the shelter terrified after her loving owner, that rescued her and her sister off the streets at 6 weeks old, passed away....more