Here is the transcript of the press release:

SMITHERS, B.C (June 21, 2012) - The Northwest Animal Shelter Society is one step closer to its goal of opening a permanent animal shelter in the Smithers area. They recently closed on the purchase of two parcels of land, equaling nearly 10 acres of property. The new site is within easy driving distance from Smithers, has road access, is fully serviced and has the required zoning for a shelter.

“The property is perfect for our needs and is the culmination of an eleven year search,” said NWAS President Sara Tomlinson. Adding that the Society has raised all capital used for the purchase through their own fundraising efforts, donations and local support from businesses and individuals. To date they have received no government grants.

The property will need to be developed, but that timeline will depend on the level of support from the community said Tomlinson. Noting that expenses of water, electrical, septic as well as a part time employee, vet bills, utility bills and a host of other costs will add up quickly. “I don’t expect much will change in the short term, we will still be a foster home based rescue until the property can be developed, said Tomlinson.“We will need lots of help moving forward.”

The NWAS has been working in partnership with the Town of Smithers nearly two years operating as the pound facility using portable kennel buildings. They would like to express their appreciation to the Mayor and Council for giving the time needed to meet the requirement of being within 10km of Smithers.“Maintaining the pound contract is critical in our efforts to open and operate an animal shelter,” said Tomlinson.

The acquisition of this property is a significant step forward in helping the community raise the standard of care and support for animals in need. The Society would like to thank Peter Lund of Remax and the management of BV Credit Union for their support.

The NWAS is an all volunteer, non-profit animal welfare society which assists hundreds of animals in need each year, including those that are abused, abandoned, injured and neglected as well as running the spay and neuter assistance program to provide low cost spay/neuter for low income families. Their rescue activities help residents dealing with marriage breakups, health issues, seniors in need of care, residents unable to afford pet friendly housing, or those having to move and unable to take their pets.

Current physical assets include 2 portable buildings, an Atco trailer and 32 dog kennels that were donated by the producers of the film Eight Below. 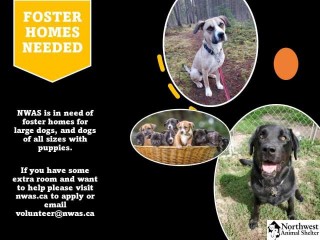 NWAS needs your help! Our list of available foster homes is getting very low. We need temporary homes for dogs and cats between Topley and Hazelton. You can have other pets and still foster! Each animal has different needs and requirements. We have some long term fosters and some short term....more 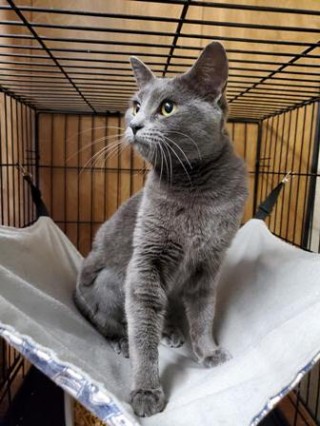 FOR ADOPTION: KATIE is an approximately 1 year old female looking for a fun forever household. This beautiful girl was found as a stray and never claimed....more