Mansi came into NW's care on Feb 4th, mat bound and scared after a number of winter months running loose in the country unable to be caught.  Sadly her litermate disappeared, probably the victim of predators.   Mansi spent a full month in foster care rebuilding her confidence and getting back to who she really is.

She turned into 13 fun-filled pounds of delightful character with good dog skills who isn't above telling off a pushy female 5 times her size.

She played very well with a dog of appropriate energy, tried to engage the resident cat in play, and formed a mutual adoration society with her foster dad who needed to do nothing more than show up to have her turn herself inside out.

She is well kennel trained having ridden many miles in the passenger seat, spending time on the job where she was so quiet one could easily forget she was there, and for safety in a huge crate  among all the resident animals when they weren't being monitored.  She's a great little sleeping companion who snores.  She has blasts of play time but is also content to slow down to the level of couch potato if that's what you're up to.  When she propped her head on your leg and stared at you with those big round eyes, it made one wish one were an artist capable of capturing her character filled little face.

Mansi made visits to the vet clinic, the local dog club to spend time in a big indoor horse arena, the shelter to meet the resident dogs and cats, and graduated to working for Northwest.  She came along to help when we shipped animals off at the airport walking through the automatic doors and trotting around the quiet terminal on leash meeting passengers and staff.  She attended a grade 8 classroom to help with a presentation to the students who were donating to the NW cause, and made a brief appearance on the stage of the Della Herman theater with 150 students in the audience.

She was fully vetted with treatment for internal and external parasites, vaccinations, and spaying.  She is now settling into her role in her new family where she is adored.  Hopefully she will have many healthy, happy, fun-filled years ahead.

We rec'd a call in late November, 2012, regarding two small terrier cross dogs, running loose in the rural Smithers area.  Apparently they had been a gift from a grandpa, a gift not well received, and they were now on their own, basically running scared.  Kind folks wanted to save them and asked for Northwest's help if the dogs could be captured.  On Feb 4th word came in that one dog was gone but the dog that was left could now be caught, and could we help.  She was delivered to the clinic on February 5th, vet checked, found to be approximately 2 years old, intact and in season, vaccinated, and treated for internal and external parasites, and turned over to Northwest.  She was picked up, tucked in and kept at the shelter overnight.

On the 5th we re-assessed.  Scared, not eating, filthy and horribly matted, this poor little girl obviously needed some hands-on TLC.  Many dreadlocks could be easily snipped off but her legs and ears were badly bound up with large mats very close to the skin.  Most of her back was also covered in a solid, filth-filled wooly carpet of hair.  Her tail was a solid lump with a bit of a free tuft at the end.  Groomers we are not, but handling was what she needed and this would be a great opportunity to begin to build her trust.  After a slow and gentle session of de-mating, she was moved home into temporary foster care.  She was placed in a quiet room in a large wire crate at waist height.  (I find to crate both dogs and cats on a table or other raised surface, is very helpful.  It's easier and more comfortable to spend time with them without having to remove them from their crates, it takes towering over them out of the picture, and I find they are more likely to move forwards for affection.)

The first challenge was to get her eating so a small piece of donated moose meat was offered.  Her tail was wagging as she gobbled it down so a dinner of moose meat, donated Cesar dog food, kibble and warm water was created, which she quickly polished off.  One problem solved.  Also very encouraging was that she continued eating with no stiffening or defensiveness even when I touched her, touched her dish, and stuck my fingers in her food.

The second challenge -- she had not gone to the bathroom at the shelter, would not eliminate while on leash, and we did not want to take her off leash.  This little girl needs to learn a comfort level while on leash, and it may well be a waiting game until she really, really has to go.  Not wanting her to be forced to eliminate on her bedding in between walks, she was given a small litter pan in her kennel.  During her first quiet time, on my return, she had peed in her litter and her bedding was still clean and dry.  Clever girl!!

She is scared but accepted gentle handling very well, even giving a couple of small licks to my face as I was working on her coat.  My big male as an adult rarely licked but when being groomed he would occasionally give tiny little tongue touches as a way to say please be careful and don't pull my hair.  I believe this was what the little girl was communicating.  Or, I could put a needy human spin on it and believe she was kissing me because she looooves me.  >)

Another session of handling and de-mating and more short walks on leash and she was tucked in for the night after a successful first day.

She has been named Mansi which in the Hopi language means "plucked flower".  I liked the gentle, young sound of the name, and felt it was appropriate for her circumstance.  She was plucked from a death sentence by people who cared enough to put in the time, effort and dedication to win her over so she could be caught and brought in to safety.  Now we'll see how our little "flower" blossoms.

Day two begins with a very early meander around the yard hoping today will be the day it becomes okay to go to the bathroom while on leash.  No luck so breakfast and grooming with everything finished except her tail.  On our first daylight walk she is trotting freely beside me with her tail up and wagging just a little.  Today she comes to work with me and  I discover she settles quite well in her crate as long as I'm around, preferably where she can see me.  She is riding in my vehicle in her crate beside me with no sign of motion sickness.  She is generally quiet and displays her stress and anxiety by shaking, sometimes quite severely. She enjoys affection and her little tail is working well, wagging when I speak to her.

On arriving home I tied her out on a long line in the sun in an area where she was safe and had been walked numerous times before.  I then moved away to where I could watch her but wouldn't be a distraction.  She fairly promptly began to try to chew through the line, stopped when I spoke to her, and then back to chewing.  Lesson learned.  If she is ever to be tied for even for a brief time, a leash won't do as she'd be through it and gone.  It's amazing how fast even a small dog's teeth can demolish a leash.

She has very briefly met two of my dogs and they like her, sniffing her with wagging tails.  She was quietly accepting, not showing any real fear, but cautious and not confident enough to reciprocate.

I'm taking her out on a flexi leash fully extended and locked hoping she will gain enough confidence to move away and begin to sniff and offer more dog-like behavior.  After many walks she is moving forwards with a little more confidence and is beginning to sniff around just a little.  If she gets tangled, she doesn't fight the leash but almost immediately begins to try to chew through it to free herself.

No success on you know what but what goes in must surely come out and with nature and patience on our side, sooner or later we'll have success.  She continues to use her litter to pee in.  If no luck tomorrow, I'll change her name to Brown-Eyed Susan. :>) 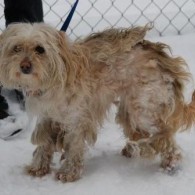 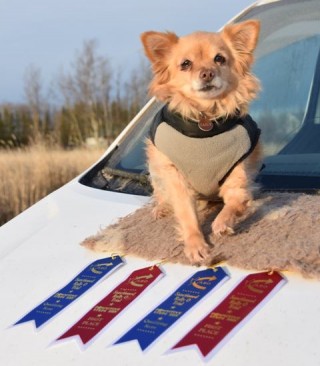 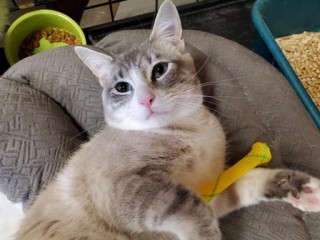