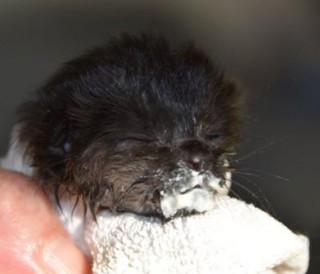 Fostering the Runner litter :
Part 1.
The good thing about modern technology is how easy it is to get in touch with people. The bad thing is how easy it is for people to get in touch. So when the “ping” of a text message sounded at 10.30 pm on a Sunday evening I knew there was a problem, probably with the shelter.
The message was from the foster coordinator of Northwest Animal Shelter. There was a litter of 3 young kittens whose mother had either disappeared or been killed by a dog. They had been orphaned a day or two earlier. They were very young, less than 10 days as their eyes weren't open yet. They had gone at least 24 hours without feeding. The people who had taken them in couldn't care for them.
As often happens in rescue, the story was muddled.
But the facts came through. These kittens needed help. As soon as possible.
I've bottle fed kittens and puppies before so felt fairly confident about taking these little ones.
Messages flew back and forth between the coordinator, myself and members of the board.
Half an hour later I was driving to the community 20 kms away while another volunteer headed in the other direction to the shelter, picked up supplies and formula for bottle feeding and dropped them off at my home.
With any young babies warmth and hydration are the two most important things to consider so had blankets and a hot water bottle with me and turned the heat up in the vehicle. Luckily they were in a box, warm and dry for the trip back.
When we got home the first priority was feeding. The kits were all scrawny but vocal and scrabbling around in the box. So mixed up the formula, picked up the biggest kit and immediately realized this was not going to be easy. In all the videos I've found showing how to bottle feed a kitten there are sturdy little creatures standing firmly on all 4 legs sucking eagerly on a bottle. Not these guys. They were too young to stand and incredibly difficult to hold as they wriggled and flailed, head frantically swinging from side to side and tiny claws scrabbling at the bottle. They had no clue how to suck on the plastic nipple and formula was going everywhere except their stomachs. And they were tiny, 3.5 to 4 ounces. Even the biggest could fit on my hand with room left over. Except they didn't stay on my hand. For creatures who can't walk they could cover ground incredibly fast, dragging themselves along, heading who knows where. Two hours later we were all covered with formula but their bellies were full. Of course what goes in must come out. And tiny kits can't eliminate on their own, their mothers lick them all over to stimulate them to pee and poop. So after eating they were stroked firmly on the abdomen with a warm washcloth as they squalled and squirmed. And finally urinated.
Success !!!
And then the whole procedure was repeated a few hours later. And again. And again. And again.
A few days went by. We were getting into a routine, feeding was slightly easier but elimination was getting more difficult. The warm washcloth wasn't always getting results. My little dog, who was adopted from NWAS 8 years ago, started helping with the process. I'd feed while she watched from the couch, when the bottle was put down Gaily would run over and lick the kittens rear end while it was held over a pad. Often she got better results than I did. But we needed help. The kits weren't gaining weight as they should, their coats always looked bedraggled, a heating pad and stuffed toy just weren't meeting their emotional needs. They needed a mother 24/7.
So we went looking for one. 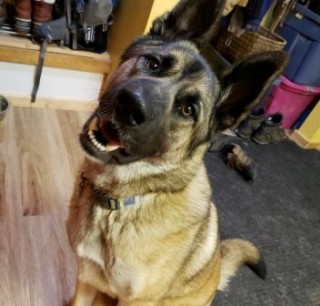 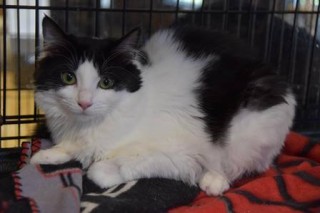