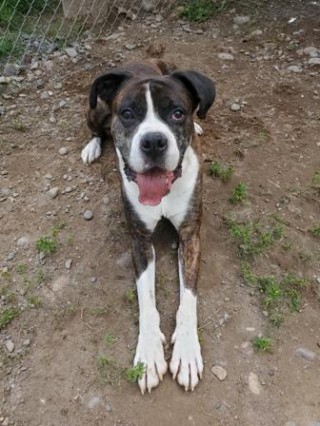 FOR ADOPTION: REX is a soon to be 9 year old, 70lb male Boxer looking for his forever home. This big, loveable goof came into our care under socialized and with some lumps that needed to be checked out by the vet. Rex knew and loved his previous family very deeply but was not used to strangers or other animals. It has taken him some time but he has learned that new people are friends with treats and he does not need to guard those he cares about. Rex was initially nervous with small children but has warmed up very well to the children that volunteer at the shelter with their parents and we think he could easily live in a home with dog savvy kids of any age. Other dogs were a big new change for Rex but he is starting to like the idea of their company. Rex seems much more at ease with smaller dogs, puppies or obviously submissive dogs. We do not think he would pair well with another large or boisterous pooch. He seems to think that cats are just fluffy puppies and he wants to be their friends. Rex could live with a calm, bold cat that will not run from him when he approaches (otherwise they may inadvertently instigate a game of tag). All that being said, Rex would be just as happy living life as an only pet again, humans are his true love. Rex is a fun boy that loves to play ball, is good in the vehicle and has a lower medium energy level. Rex throughly enjoys long walks, could do easy hikes in the summer months or snowsuit up to accompany you cross country skiing in the winter but he will not make a good partner for jogging, cycling or other similar activities. It took a long time for testing on all of Rex’s lumps to come back (he had a cyst under his tail and spots on both his eyes) but we are thrilled to say that everything has come back benign and he is a healthy middle aged man! Rex is non destructive, kennel trained, clean indoors, happy in the vehicle and walks well in a loopy harness. He would be thrilled if his family was home most of the time but he also knows how to be respectful of the home if his people have to go out for work or errands. He is neutered, vaccinated and up to date on parasite control. If you’ve been looking for a fun loving, affectionate buddy apply today for a chance to meet REX
*please expect a minimum of a weeks wait for a response on your application
*due to the high volume of applications we have been receiving only the best matches for Rex will be contacted 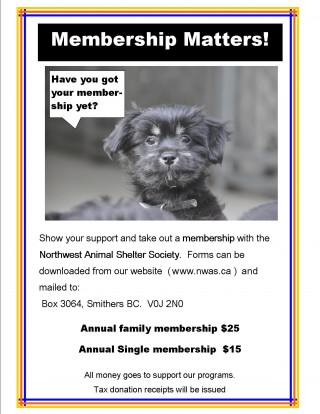 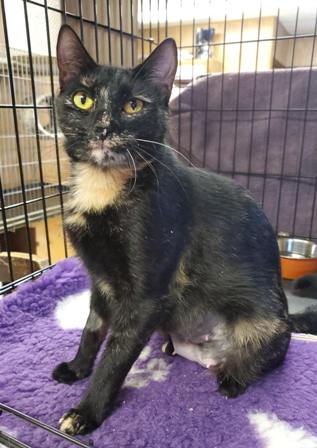 FOR ADOPTION: MANDY is a stunning 18 month old female looking for her forever family. Mandy is an affectionate and playful girl that will be a fun addition to most households....more